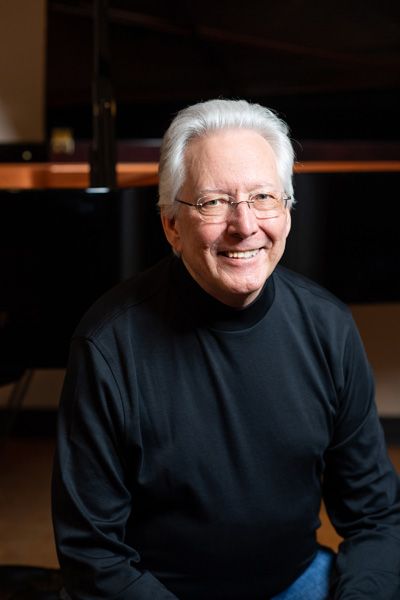 Dave Edwards is a seasoned professional musician with extensive experience onstage as well as in the recording studio. He began playing piano professionally at a local pizza parlor as a teenager. He studied classical and jazz piano at the University of North Texas, and afterward played in rock groups, country dance bands and lounge acts. He has done a considerable amount of recording work, including commercials, film scores, and song demos, as well as a stint with a band that was signed to Capitol Records.

He currently lives in the Denver, Colorado area and spends his time while not exploring the Rocky Mountains working on his original piano music.

After starting piano lessons with a neighbor when he was 12 years old, he spent his junior high and high school years playing in the school band and studying piano with Dorothy Allinder.  As a high school senior, he wrote and directed a musical called “For the Love of Pete,” loosely based on Shakespeare's "Julius Caesar."

He went on to study music at the University of North Texas — classical piano with Larry Walz and jazz theory with Dan Haerle. He would continue college music studies intermittently while working at recording studios in the Dallas-Fort Worth area as a composer and pianist and playing in local bands. He wrote and performed on many commercials and soundtracks, including the 1970s theme music for the Houston Rockets NBA team.

His first rock and roll band, The Nevada Brothers, was made up of musicians with whom he had previously worked in the studio.  That band was followed by a succession of bands that toured the dance clubs of Texas and the Southwest.  During that time, he played piano for a number of female vocalists, including Marilyn Katz, and Jennifer Flowers (who later became famous for reasons other than music).

In the 1970s he played with Tejas in Park City, Utah, and Rebirth in Durango, Colorado, with some of the same musicians from the Nevada Brothers and other studio players.

After a brief playing hiatus, during which he worked as a salesman at one of the largest music stores in Texas, Arnold & Morgan Music Company, he helped form a short-lived country-rock band called Oasis.  That was followed in 1981 by the band, Stallion. Dave’s association with Stallion would last for 12 years.  During that time the band became one of the most popular “New Country” bands in the North Texas region.  Stallion was briefly the backup band for B.W. Stevenson before his untimely death, and was the opening act for scores of major recording artists from Chuck Berry to Garth Brooks.  They played major Country & Western clubs from Billy Bob’s Texas to Ranchman’s in Calgary, Canada.  Stallion recorded at many different studios, the most memorable of which were in Muscle Shoals, Alabama, and Willie Nelson’s Pedernales studio near Austin. In 1989 Stallion was signed to a development deal with Capitol Records, working with producer James Stroud.

A grueling performance schedule along with heavy computer use led to the development of problems with the joints and tendons of his hands, even as Stallion’s deal with Capitol collapsed with the departure of James Stroud, and internal conflicts threatened to break up the band.  A year later he left Stallion, thinking his piano playing days could be over.

After he met classical pianist Leon Fleischer following a performance with the Dallas Symphony – it was Fleischer’s first concert after a long battle with his own hand problems – Dave was inspired to attempt a return to playing.  With a regimen of special exercises, massage and technique adjustments, Dave was eventually able to return to playing the piano without resorting to surgery.

Dave began playing as a solo pianist in 2004, playing for weddings, parties and corporate functions.  His first solo album, “Elusive Dreams,” was released in the spring of 2011.  His second album “The Illusion of Time” was released in April 2014. Those albums were an exploration of his various musical influences, including compositions from every period of his musical career.

After the release of “The Illusion of Time,” Dave realized that, in order to have a career as a solo artist, he had to focus on a musical style that was truly his own, and he spent the next few years zeroing in on what that would be.

The release of his third album, “Still the River Flows,” represents the culmination of that journey. It features solo piano compositions straight from the heart, with Dave’s own personal touch. Here’s hoping it is only the beginning of a whole new chapter, with many more yet to come.